Initial Impressions: Satan's Host: By the Hands of the Devil 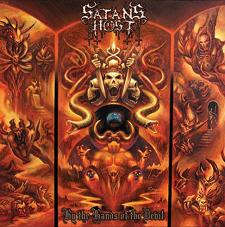 I have been a big fan of Satan's Host since discovering them a few years back. Of course when I found out about them, they were more of a blackened thrash metal band with raspy vocals and long, riff-driven songs. I was aware of their earlier material with Harry "The Tyrant" Conklin of Jag Panzer from the 1980's, but had not had the opportunity to check it out. Sometime last year, it was announced that The Tyrant was coming back to Satan's Host. I was not sure what to think. I like Jag Panzer, but I also like the blackened thrash output of Satan's Host. What was going to happen? What would I think of this reformation?

Well, to put it simply, this is a contender for Album of the Year.

Holy shit, this is a great album. This is very dark American power metal with some almost death metal style riffing at times. It is aggressive and nasty stuff. The guitar work by longtime guitarist Pat Evil is terrific. Whether it's a particularly heavy riff or an incendiary solo, Evil is truly an underrated guitar master. The guitar really drives the album, as is the case for all of the band's material. This is a powerfully melodic album but still remains dark enough to satisfy those fans of their previous sound.

The vocals are extremely impressive. Conklin has always had one of the best voices in American power metal, and now he brought it back to the darkness that is Satan's Host's music. It matches surprisingly well, even bearing similarities to Mercyful Fate's early material. His soaring style contrasts with the dark and heavy riffing, but it still just sounds great together.

I am particularly impressed with the surprisingly powerful "Fallen Angel", which will likely be among my favorite songs of the year by the end. It is an amazing song that sends chills down my spine.

There is still a lot of time left, but so far, this is the Album of the Year.
Posted by Metallattorney at 9:50 AM

Metallattorney
Nebraska
Disclaimer All opinions expressed herein are solely my own, and do not reflect the opinions of my current or former employers, or any other person or entity with which I am or have been affiliated. I am a small-town attorney with a passion for heavy metal music and baseball. This blog will be about those things and whatever the hell else I feel like. Nothing in this blog is intended as legal advice, and does not create an attorney-client relationship. All legal discussions are strictly informative, not advisory, and accuracy of the information is not subject to any warranty, express or implied. If you choose to rely on such information, you do so completely at your own risk. If you believe you may have a legal issue, an attorney licensed in your jurisdiction can provide legal advice which will take into account your own unique circumstances and the applicable law.