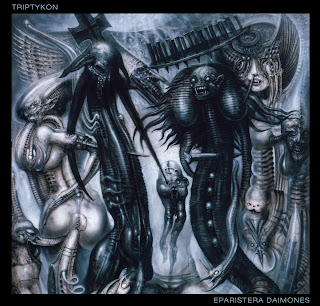 One of the most hyped and highly anticipated albums of the year this year is from a new band. Though, that's not entirely accurate. Triptykon is a new band, but its members have been around, in particular one Tom Gabriel Warrior. Last year, Warrior left Celtic Frost, thus ending that pioneering band's existence for at least the second time due to some falling out with one of the other longtime members. With a bunch of stuff written for the former band in his hands, he formed Triptykon.

This album does definitely feel like a Celtic Frost album. And by that, I mean it's cold, with a foreboding atmosphere, and it's heavy as fuck. Triptykon plays some strange mix of death, black, and doom metal. The riffs are heavy and downtuned, giving off an eerie vibe. The vocals are typically gruff, a vocal style Warrior has become known for over the years, although once in awhile there are some near-chanting vocals.

There are moments in the album where everything is somewhat soft and serene, but these are typically the calm before the storm. This whole album feels dark and intimidating, like walking through a deep cave at night.

Most of the songs are epic length, including the powerful opening salvo of "Goetia" and the closer "The Prolonging" which reaches 19 minutes. Only one track is less than five minutes and that's more of a lead-in track to the next song.

The only track I do not care for is the melodic, gothic track "My Pain" which is simply a synthesizer line over whispered vocals by Warrior and female vocals that sound like they came out of an 80's band. That's the only misstep on the album.

This is one monster of an album and is easily a contender for album of the year already. Currently it's in the lead, slightly overtaking the new Orphaned Land album.
Posted by Metallattorney at 7:51 AM

Metallattorney
Nebraska
Disclaimer All opinions expressed herein are solely my own, and do not reflect the opinions of my current or former employers, or any other person or entity with which I am or have been affiliated. I am a small-town attorney with a passion for heavy metal music and baseball. This blog will be about those things and whatever the hell else I feel like. Nothing in this blog is intended as legal advice, and does not create an attorney-client relationship. All legal discussions are strictly informative, not advisory, and accuracy of the information is not subject to any warranty, express or implied. If you choose to rely on such information, you do so completely at your own risk. If you believe you may have a legal issue, an attorney licensed in your jurisdiction can provide legal advice which will take into account your own unique circumstances and the applicable law.